Her elder daughter, Lavinia, was Extra Lady-in-Waiting to Diana, Princess of Wales.

Posted by Michael Rhodes at Wednesday, September 27, 2017 No comments:

Michael Tyler is the son of Mr Terrence Tyler and the late Lyn Tyler, of Morpeth, Northumberland, & the Hon Lucinda Tyler is a daughter of the 4th Baron Stamp (b 18 Sept, 1935), by his second wife, the former Carol Anne Russell.

__. The engagement was announced 27 September, 2017, between Mr W.H. (Harry) Lyon-Smith, son of the late Mr & Mrs David Lyon-Smith, of Gidleigh, Devon, & Juliet Elsie Tollemache (born 1974), scion of the Barons Tollemache, daughter of Mr Michael Humphrey Tollemache (b 1930), of Tollemache Hall, near Ipswich, by his wife the former Gay O'Grady Thompson.

Billy More Nisbett, descended from the Earls of Stair, is the son of George Alan More Nisbett, of The Drum, Edinburgh, by his wife the former Patrea MacDonald.

Charlotte More Nisbett is a daughter of the late Mr David Davison and of Mrs Davison, of North Canterbury, New Zealand.

Billy's great-great-grandmother was Lady Agnes Dalrymple, dau of the 9th Earl of Stair.

Charles (Charlie) Browne Martin WOOD (b 1973) s of Simon Richard Browne WOOD (b 1947, scion of the WOOLLCOMBE gentry family formerly of ASHBURY) and his former wife Clare Launa FITZALAN HOWARD (b 1949), scion of the Dukes of NORFOLK, the earls of ALBEMARLE and gentry family GREENWOOD of Swarcliffe Hall. He m 2011 Hon Henrietta (Hatta) Rose BYNG (b 1977) d of 11th Viscount TORRINGTON (b 1943) and Susan Honor d of Michael George Thomas WEBSTER, scion of the CONYNGHAM marquesses.

Posted by Michael Rhodes at Tuesday, September 26, 2017 No comments:

__. The engagement was announced 23 September, 2017, between Christopher John Noel Buxton (born 1988), scion of the Barons Noel-Buxton, son of the Hon Simon Campden Buxton (1943), of Tormarton, Gloucestershire, by his wife the former Alison D. Liddle, & Margaret B. Babington, daughter of Mr & Mrs Joseph Babington, of Mobile, Alabama.

Arthur Ponsonby is the son and heir of Sir Charles Ashley Ponsonby, 3rd Baronet (b 10 June, 1951), of Woodstock, co Oxford, by his wife the former ,Mary Priscilla Bromley Davenport.

Viscount Lymington is the only son and heir of the 10th Earl of Portsmouth (b 25 July, 1954), of Farleigh Wallop, Hampshire, by his first wife, the former Candida Frances Juliet McWilliam (now Mrs Candida Dinshaw, of Edinburgh).

Flora Lymington is the second daughter of Mr George Pownall, of London, by his wife the former Elfreda Wadsworth.

Harry Byatt: son of one of Diana's Ladies in Waiting dies at 19

_. Harry Byatt, who died 6 August, 2017, whilst underwater swimming in Greece, aged 19, was the son of a Lady-in-Waiting to Diana, Princess of Wales.

Harry was the son of Duncan Ian Arthur Campbell Byatt (b 1962), by his wife the former Alexandra Mary Loyd (b 1961), a friend of Diana, Princess of Wales, and one of her ladies in waiting. Harry's maternal grandfather, Sir Julian Loyd, KCVO, of that landed family, was land agent to Her Majesty the Queen at Sandringham, 1964-91.

There will be a memorial service in Scotland on Friday 6 Oct, 2017, at Leargnahension Church, Carse, and a service of thanksgiving in London at St Luke's Church, Ramsden Rd, SW12, on Wednesday 8 November, 2017.

Lord Cochrane of Cults is survived by his wife, two sons, Thomas and Michael, and two grandchildren, Katherine and Edward.

The peerage now devolves upon his elder son, Thomas, who was born 7 Sept, 1957.

Peter Cazalet is a son of Peter Charles Grenville Cazalet [b 1959], by his wife the former Victoria Jane Perry.

Rowena is a daughter of Dr & Mrs Barry Jones, of Lower Swell, Somerset.


Posted by Michael Rhodes at Monday, September 18, 2017 No comments:

Tom Redmayne is a younger brother of the Oscar winning actor Eddie Redmayne. 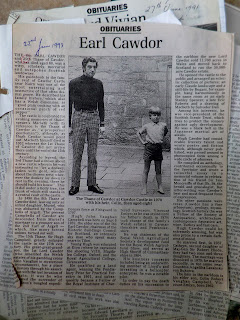 Posted by Michael Rhodes at Saturday, September 16, 2017 No comments:

Christopher John Royden was born 26 February, 1937, and succeeded his father, Sir John Ledward Royden, in 1976. Married in 1961, Diana Bridget, the only daughter of Lt-Colonel Joseph Henry Goodhart, MC, by whom he had issue, two sons and a daughter. The baronetcy now passes to his elder son, John Michael Joseph, who was born 17 March, 1965. 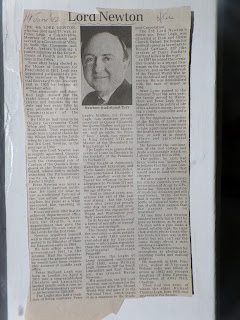 Posted by Michael Rhodes at Thursday, September 14, 2017 No comments:

_. The engagement was announced 13 September, 2017, between George C.A. MacColl, eldest son of Mr & Mrs Christopher MacColl, of Holybourne, Hampshire, & the Hon Alice Mary Jeffreys (born 1986), scion of the Barons Jeffreys, only daughter of the 3rd Baron Jeffreys (born 1957), of Sproxton, Leicestershire, by his wife the former Anne Elizabeth Denarie.

_. The engagement was announced 12 September, 2017, between Archer William Montagu-Pollock (born 1986), scion of the Montagu-Pollock baronets, second son of Jonathan David Montagu-Pollock (born 1947), of Winterbourne Stoke, Wiltshire, by his wife the former Deirdre Clare Binding, and Louisa Alexandra Matilda Matheson (born 1989), scion of the Matheson baronets, daughter of Lt-Col Sir Alexander Matheson, 8th Baronet (b 26 Aug 1954), of Brightwalton, Berkshire, by his wife the former Katharine Davina Mary Oswald (descended from the Marquesses of Exeter).

He was born 10 June, 1966, son of Jonkheer John Louson by his wife the former Anne Denise Doughty-Tichborne (b 3 March, 1938), daughter of the 14th baronet; married Catherine Blair, by whom he had issue, three children, Ella, Jamie and Nina.

__. The marriage took place ___ September, 2017, at Dummer, Hampshire between Harry Timothy Cobb (b 1985), descended from the Holland-Martin landed family, son of Mr Timothy B Cobb, of Bothampstead, Hampstead Norreys, Berkshire, by his wife the former Emma Rose Holland-Martin (b 5 Sep 1953), & Eliza C.A. Ferguson (b 1986), descended from the Dukes of Buccleuch & Queensberry etc, daughter of the late Maj Ronald Ivor Ferguson, by his second wife the former Susan Rosemary Deptford (now Lady Swinburn, of Dummer Down, Hampshire).

Eliza Ferguson is a half-sister of Sarah Duchess of York. The duchess and Princess Beatrice of York were present at the marriage.

Viscount Glenapp is the son and heir of the 4th Earl of Inchcape (b 1943), and Countess of Inchcape, of Clyffe Pypard, Wiltshire. Viscountess Glenapp is a daughter of Mr and Mrs Charles Jackson, of Cottisford, Northamptonshire.

Charles Henry Gordon-Lennox was born 19 Sept, 1929, son of the 9th Duke of Richmond & Gordon (1904-89), by his wife the former Elizabeth Grace Hudson (died 1992); succeeded to the family honours on the death of his father, 2 Nov, 1989; served as Lord Lieutenant for West Sussex until his resignation in 1994; married 26 May, 1951, Susan Monica, daughter of Colonel Cecil Grenville-Grey, CBE (& descended from the Morrison-Bell baronets), by whom he had issue, and adopted daughters.

The Duke is succeeded by his only son, Charles Henry Gordon-Lennox, styled Earl of March & Kinrara, who was born 8 January, 1955. The 11th Duke is married to the Hon Janet Elizabeth Astor, daughter of the 3rd Viscount Astor.

_. The Baroness O'Neill, who died in County Antrim, 29 August, 2017, aged 76, was the wife of the 4th Baron O'Neill, sometime Lord Lieutenant of County Antrim, and was a scion of the Dukes of Buccleuch and Queensberry.

She married 10 June, 1963, Raymond Arthur Clanaboy O'Neill, 4th Baron O'Neill, KCVO, who was born 1st September, 1933, and survives her together with their three sons.

_. The engagement was announced 1 September, 2017, between Capt Thomas Cheesbrough, Royal Engineers, elder son of Mr & Mrs David Cheesbrough, of Moss, Wrexham, & the Hon Iona Tessa Hovell-Thurlow-Cumming-Bruce (b 19 Oct, 1987), scion of the Barons Thurlow, elder daughter of the 9th Baron Thurlow (b 13 Apr, 1952), of Mapledurham, Co Oxford, and Killiechronan, Isle of Mull, by his wife, the former Bridget Anne Julia Cheape.