_. The Duchess of Cornwall was present at the marriage which took place at the Church of the Incarnation, Illora, near Granada, Spain, 28 May, 2016, between Alejandro Santo Domingo, son of the late Julio Mario Santo Domingo & of Beatrice Santo Domingo, & the Lady Charlotte Wellesley (born 8 Oct, 1990), youngest daughter of Arthur Charles Valerian Wellesley, 9th Duke of Wellington (b 19 Aug 1945), of Stratfield Saye, Berkshire, and Apsley House, London, by his wife the former Princess Antonia Brigid Elizabeth Louise von Preussen (born 28 Apr, 1955), descended from the Royal House of Prussia, & ____.

_. The engagement was announced 27 May, 2016, between Michael David Alexander Douglas-Home (b 1987), styled Lord Dunglass, son and heir of the 15th Earl of Home, KT, CVO, CBE (b 1943),of the Hirsel, Coldstream,  by his wife the former Jane Margaret Williams-Wynne (b 1949), scion of the baronets of that name, & Sally Antoinette Underhill (b 1989), daughter of Group Capt Gregory B.P. Underhill, of Churchdown, Gloucestershire, by his wife the former Olivia R. Canning.

Lord Dunglass is a grandson of the 14th Earl of Home, KT, who disclaimed his peerages for life in 1963, and was Prime Minister, 1963-64, later Foreign Secretary as Sir Alec Douglas-Home, and a life peer as Lord Home of the Hirsel, &c.

Lady Bolton is survived by her husband and by three sons.

_. The engagement was announced 21 May 2016 between Edward Robert Waldegrave, styled Viscount Chewton (born 1986), elder son and heir of the 13th Earl Waldegrave (b 1940), of Chewton Mendip, Somerset, by his former wife, the former Mary Alison Anthea Furness, & Amanda Louise Sheppard, only daughter of Mr & Mrs Michael Sheppard, of Bottesford, Nottinghamshire. 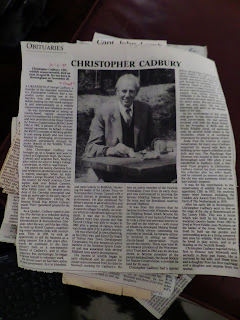