She was created a life peer in 1978, as Baroness Lockwood, of Dewsbury, in the County of West Yorkshire; she chaired the Equal Opportunities Commission, 1975-83; was President of Birkbeck College, London, 1983-89; and was appointed a deputy Speaker of the House of Lords in 1989.

Betty Lockwood married in 1978, Lieutenant-Colonel Cedric Hall, who died in 1988.

_. The Lady Linda Vane Percy, who died 19 April, 2019, aged 70, was a member of the Grosvenor family, headed by the Croesus-rich Duke of Westminster.

Lady Linda was chatelsine of the 18th century Island Hall, in Godmanchester, ancestral seat of her husband.

Her elder half-brother, the 6th Baron Ebury [born 1934], succeeded his fourth cousin, in 1999, as the Earl of Wilton, and she was later raised to the rank and precedence of the daughter of an Earl.

The funeral takes place at the Church of St Mary the Virgin, Godmanchester, 7 May, 2019. 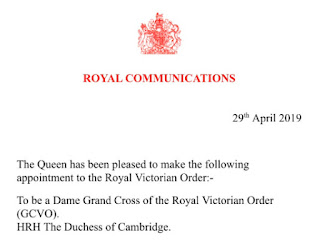 Nigel Edward Seely was born 28 July, 1923, son of Sir Victor Seely, 4th Baronet [1900-80] by his first wife the former Sybil Gibbons [later Lady Paget of Northampton, died 1994]; educated at Stowe; succeeded to the baronetcy on his father’s death, 10 May, 1980; married firstly, 1949, Loraine Lindley-Travis, by whom he had three daughters; married secondly, Trudi Pacter.

Sir Nigel is survived by his second wife and his daughters.

he engagement was announced 27 April, 2019, between Captain Alexander James Kirkland Wilson [born 1991], Grenadier Guards, descended from the Earls of Longford, son of Mr and Mrs Henry Wilson, of Penley, Wrexham, and the Lady Helena Georgia Parker [born 1991] third and youngest daughter of the 7th Earl of Morley [born 22 Aug 1956], and the Countess of Morley [nee Carolyn McVicar].

Ian Friend is a son of Dr Howard Friend. He married in 2014, Lucy Milburn, daughter of Sir Anthony Milburn, 5th Baronet [born 1947], by his wife the former Olivia Shirley Catlow.

Charlie Evans-Freke is a son of the Hon John Anthony Evans-Freke (b 1949) son of the 11th Baron Carbery (1920-2012), and his wife the former Veronica Jane Williams, daughter of Maj Eric Williams, of  Lynturk, Alford,  Aberdeenshire.

Sally Evans-Freke is the elder daughter of Mr Richard Trethewie, of Launceston, Tasmania, and Mrs James Davidson, of Melbourne, Victoria.

Posted by Michael Rhodes at Thursday, April 25, 2019 No comments:

_.The engagement was announced 17 April, 2019, between Henry Charles Hiscox [born 1989] second son of Robert Ralph Scrymgeour Hiscox, of Rainscombe Park, Marlborough, Wiltshire, by his wife the former Lady Julia Elizabeth Meade [born 1953] scion of the Earls of Clanwilliam, & Arabella K. Toler, daughter of Lieutenant-Colonel Hugh Toler [born 1953] of Kelvedon, Essex, descended from the Dukes of Northumberland, via the Heber-Percy family, and Mrs Toler.

Henry Hiscox is a grandson maternally of the 7th Earl of Clanwilliam.

Posted by Michael Rhodes at Wednesday, April 17, 2019 No comments:

She was chatelaine of the magnificent Highclere, the family seat made famous as TV’s Downton Abbey.

She was born in the United States, 29 April, 1935, as Jean Margaret [Jeannie] Wallop, scion of the Earls of Portsmouth, elder daughter of the Hon Oliver Wallop, who made his home in Wyoming, by his American-born wife Jean, daughter of Edward Small Moore, of New York.

She married in New York, 7 January, 1956, Henry George Reginald Molyneux Herbert, then styled Lord Porchester, member of the Queen’s inner circle, and later her racing manager. Her husband succeeded his father as 7th Earl of Carnarvon in 1987, was appointed KBE [1976], and KCVO [1982]; and he died suddenly, 11 September, 2001, the day of the attack on the Twin Towers. The Queen and the Duke of Edinburgh attended his funeral at Highclere.

Her Majesty The Queen attended the funeral which took place at the Church of St Michael and All Angels, Highclere, 25 April, 2019.

She worked as a journalist on the Daily Mail and London Evening Standard, and was for ten years the social editor of Tatler. She was later a successful novelist.

She was born 30 March, 1930, as Una-Mary Nepean-Gubbins, daughter of Hugh Power Nepean-Gubbins, of Rumbling Bridge Cottage, Dunkeld, Perthsire, and married in 1951 [div 1979] Archie Parker, royal photographer, a scion of the Earls of Macclesfield.

Guy Horner is the youngest son of Mr and Mrs G. M. Horner, of Bishops Itchington, Warwickshire, and Lady Sarah Katherine Jane Horner [born 1977] is a daughter of the 7th Earl of Clarendon [1933-2009] by his wife the former Jane Diana Dawson.

Lady Sarah is a sister of the current 8th Earl of Clarendon.

She was chatelaine of Overbury Court, a magnificent house, in Gloucestershire, on an estate which includes several villages, in the possession of the Martin family since the days of King George I.

She was a daughter of Major John MacLean Grant and Mrs Horace Webber, and married 28 December, 1955, Edward Holland-Martin, an old Etonian, of Overbury Court, Tewkesbury, son of Robert Holland-Martin, CB. The Martin family were wealthy bankers, founders of the eponymous bank [later merged with Barclays].

Her husband was one of six brothers. The youngest, Christopher Holland-Martin MP, married Lady Anne Cavendish, daughter of the 9th Duke of Devonshire.

Edward [Ruby] Holland-Martin, her husband was a successful steeplechase jockey, but suffered a serious fall in 1952. With his brother he founded the Overbury Stud, and bred a Derby winner, Grundy. Mr Holland-Martin was a governor of the Bank of England.

Amanda Ash is a scion of the Earls of Lauderdale, a daughter of Maj David Edward Maitland-Makgill-Crichton [b 1952], by his wife the former Sheena Anne Callander [born 1954].

Sir Alexander served as High Sheriff of Cambridgeshire, 1987-88, and was a deputy lieutenant of the county.

Alexander James Reid was born 6 December, 1932, son of Sir Edward Reid, 2nd Baronet, KBE, by his wife Tatiana [died 1992], daughter of Colonel Alexander Fenoult, formerly of the Russian Imperial Guard. He succeeded to the baronetcy upon his father’s death, 1972.

His grandfather, James Reid, was Physician in Ordinary to Queen Victoria, King Edward VII, and to King George V, and created a baronet in Victoria’s Diamond Jubilee year. He married Queen Victoria’s Maid of Honour, the Hon Susan Baring, a great-great aunt of Diana, Princess of Wales.

Alexander Reid married 15 Oct, 1955, Michaela Ann, daughter of Olaf Kier, CBE, of Cokenach, Royston, Hertfordshire, by whom he had a son, and three daughters.

The baronetcy now passes to his son, Charles Edward James Reid, who was born 24 June, 1956.

_. The Hon Gillian Doreen Marler, wo died 7 April, 2019, was the wife of the Sussex county cricketer Robin Marler, and daughter of the Baron Taylor of Hadfield [1905-95].

She was born in 1934 a daughter of the then Frank Taylor, by his wife the former Evelyn Woodrow. Her father, millionaire founder of the construction company Taylor Woodrow, was created a life peer in 1983 as Baron Taylor of Hadfield.

Sir Simeon is succeeded by his only son, Stephen Louis Bull, who was born 5 April, 1966.

_. Michael Robert Fearon Gunningham, who died at Hastings, 5 April, 2019, aged 94, was briefly an uncle [by marriage] of Diana, Princess of Wales.

X
Posted by Michael Rhodes at Saturday, April 06, 2019 No comments:

It was at the Elephant House cafe where JK Rowling penned her first Harry Potter book.

He leaves a son and daughter from his first marriage. The baronetcy is now inherited by his only son, Benjamin James Fraser, who was born 6 April, 1986.

Posted by Michael Rhodes at Thursday, April 04, 2019 No comments:

__. Myee Miranda Hyde Villiers, who has died aged 83, was a scion of the Keppel Earls of Albemarle, and a kinswoman of HRH The Duchess of Cornwall.

She married 19 July, 1958, Dr John Francis Hyde Villiers (b 1936), scion of the Earls of Clarendon, by whom she had issue, a son, Daniel, and three daughters, Cecilia, Aniela and Susanna.

Posted by Michael Rhodes at Wednesday, April 03, 2019 No comments:

She was a daughter of Gerard Walravens, of Brussels, sometime Belgian ambassador to Turkey, and married firstly, 1958 [div] the Hon Ben Charles Wilson, who in 1974 succeeded as 4th Baron Nunburnholme [1928-1999], and married secondly _____.

She leaves four daughters from her marriage to Lord Nunburnholme, Lorraine, Tatiana, Ysabelle and Ines.

It is Charlotte’s second marriage. Her first marriage, 22 July, 2011, which ended in divorce in 2012, was to Charles Robert George Innes-Ker, styled Marquis of Bowmont and Cessford [born 18 February, 1981], elder son and heir of the 10th Duke of Roxburghe [b 1954], of Floors Castle, Kelso, by his first wife the former Lady Jane Meriel Grosvenor [ now Lady Jane Dawnay], scion of the Dukes of Westminster.

The Hon Mary Bayliss served the county of Berkshire as Lord Lieutenant from 2008-2015, and was appointed CVO for her services as the Queen’s representative there.

She was the former Irmgard Wilhelmina Maria Schnidrig, daughter of Alois Schnidrig, of Prattein, Switzerland, and married 6 Oct, 1956. Her husband was the son of Sir Charles Wraxall, 7th Baronet [1896-1951], and his wife the former Marceline Cauro [who died 1959].