Richard Bagot is a son of Charles Henry (Hal) Bagot (born 1946), of Levens Hall, by his wife the former Susan Elizabeth Ross, and is a grandson of Oliver Robin Bagot, [1914-2000], of Levens Hall, who had been born surnamed Gaskell, of a landed family, in 1914, son of Henry Melville Gaskell, JP, and his wife, Dorothy Bagot, scion of the Barons Bagot. He assumed, by Royal Licence, the surname of Bagot in lieu of his patronymic, in 1936.

Naomi Bagot is a daughter of Martin O.M. Kelly, of Winchfield, Hampshire, by his wife the former Gillian J. Francis.
-==-

Henry is a son of the Hon Sir Nicholas (Mr Justice) Mostyn (born 1957), of the baronets of that name, by his wife the former Lucy Joanna Willis.

Lucy is a daughter of (David) Harvey Rands (b 1951), by his wife the former (Florence) Anne Gretton-Watson.

_. Sir Gordon Leith-Buchanan, 8th Baronet, was killed in a motor accident, 26 May, 2018, at Haymarket, Prince William County, United States. He was 43.

Gordon Kelly McNicol Leith-Buchanan was born 18 October, 1974, the only son of Sir Charles Leith Buchanan, 7th Baronet (1939-98), of Clifton, Virginia, by his wife the former Marianne Kelly (from whom he was divorced in 1987).

Sir Gordon married 4 Aug, 2007, at Farifax, Virginia, Courtney Ann Hubbard, by whom he had a daughter, Olivia Mary, born in December, 2007, and a son, Scott Kelly Leith-Buchanan, who was born in Fairfax, Virginia, 30 September, 2010. The son now succeeds as 9th baronet.

On 26 May, 2018, Sir Gordon lost control of the Kawasaki motor cycle he was driving on Stormy Drive, Haymarket, in Prince William County. The baronet was not wearing a crash helmet. He was taken to hospital where he died shortly after.

He was a son of Lt-Col Eric Hunt-Davis, of Johannesburg, South Africa,by his wife the former Mary Eleanor Turnbull Boyce; married 1965, Anita Gay Ridsdale, daughter of Francis Ridsdale, by whom he had issue.

Adrian is a son of Mr & Mrs Richard Massie-Blomfield, of Cavina, Nairobi, and Catrina is the daughter of Alexander Donald Stewart 15th of Ardvorlich (b 1933), of that landed family, of Perthshire, by his wife the former Virginia Mary Washington, daughter of Capt Peter Washington, of Wokingham, Berkshire.

Countess of Sutherland: no apologies for highland clearance 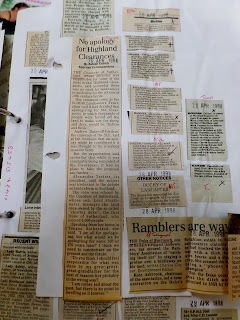 On the morning of his wedding it was announced that the Queen had conferred the Dukedom of Sussex, Earldom of Dumbarton and Barony of Kilkeel upon her grandson.

Under the terms of the Letters Patent of 1917 the children of this marriage will be known as Lord or Lady (Christian name) Mountbatten-Windsor. A first son will be known by his father's second peerage, Earl of Dumbarton.

In 1960 the Queen announced that any male line descendants not bearing royal styles and titles would bear the surname Mountbatten-Windsor.

On the succession to the throne of the Prince of Wales then all his male line grandchildren will all be HRH Prince/Princess, and Harry and Meghan's children will advance to this royal style and title.

However, the Queen may declare that the future children of the Duke and Duchess of Sussex will be Princes and Princesses with the prefix HRH. Her Majesty made a similar announcement in 2012 before the birth of Prince George, because only the eldest son of the eldest son of the Prince of Wales is entitled to the royal style and title under the terms of the 1917 letters patent. Without the Queen's intervention Princess Charlotte would have been Lady Charlotte Mountbatten-Windsor, and Prince Louis would be known as Lord Louis Mountbatten-Windsor.

The new father is the eldest son and heir of the 13th Baron Digby (b 1954), by his first wife the former Susan Watts. 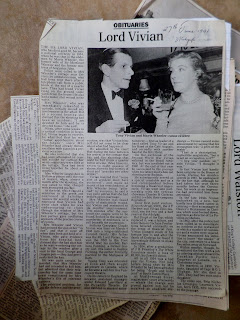 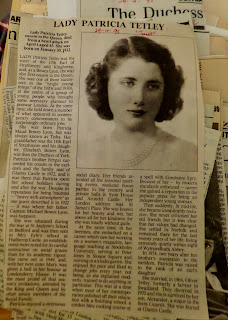 The bride-to-be is descended from Sir George Baker, Recorder of Newcastle-upon-Tyne, one of the loyal defenders of that town for King Charles I in the English Civil War.

Her elder sister, Lady Anne Coke, Lady in Waiting to Princess Margaret, was the wife of the 3rd Baron Glenconner. Lady Anne was one of the Queen's trainbearers at the Coronation, 1953.

Lady Carey married 30 April, 1960, Bryan Ronald Basset, CBE (dec.,) scion of that landed family of Tehidy Park, the only surviving son of Ronald Lambert Basset (1898-1972), by his wife the former Lady Elizabeth Legge, DCVO (1908-2000), scion of the Earls of Dartmouth, by whom she had issue, three sons. She was precdeceased by her husband and one of her sons. 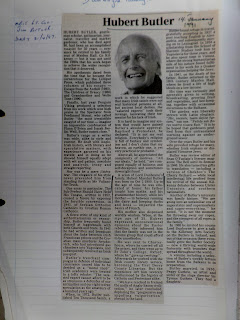 The Hon William Jolliffe is the eldest son and heir of the 5th Baron Hylton [Peerage of the UK, cr 1866] [b 13 Jun 1932],  by his wife the former Joanna Elizabeth Bertodano [descended from the Earls of Mexborough].

The Marquess of Bristol is a younger half brother of the late 7th Marquess, and inherited the family honours, 10 January, 1999.  He is also Earl of Bristol, Earl Jermyn, and Baron Hervey.

Mrs Tufnell is survived by her husband, and leaves a son (Frederick) Charles and a daughter Charlotte (Lottie) Margot.

A service of Thanksgiving will take place at Winchester Cathedral, 4 July, 2018.

The Earl of Erne, who is also Viscount and Baron Erne and Baron Fermanagh, succeeded his father, 23 Dec, 2015.

_. Denys Archibald Rowan Hamilton, MVO, DL, late the Black Watch, who died 10 May, 2018, aged 97, was a scion of the Rowan Hamilton Irish landed family, of Killyleagh Castle. He was a kinsman of Her Majesty The Queen.

Denys Rowan Hamilton was High Sheriff of County Down in 1975; served as ADC to the Governor of Southern Rhodesia and was appointed the MVO in 1947.

He was born 26 April, 1921 a son of Brigadier-General Gawain Rowan Hamilton (1884-1947), by his wife the former Phyllis Frances Agnes Blackburn, who was a granddaughter maternally of the 13th Earl of Strathmore & Kinghorne.

He married 16 Nov, 1961, Mrs Wanda Annette Maxwell, daughter of Lt-Col Rupert Warburton, by whom he had issue, a son and two daughters.

A Service of Celebration takes place at St John The Evangelist, Killyleagh, County Down, 2 July, 2018. 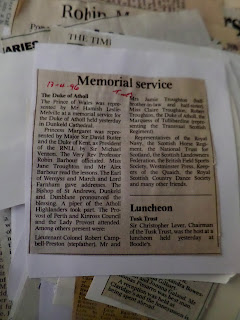 A celebration of the Countess of Strafford's life takes place at St Mary's Church, Easton, near Winchester, Friday 18 May, 2018.

She was born 24 November, 1926, as Patricia Elizabeth Tuckwell, a daughter of Charles Tuckwell, of Sydney, Australia, by his wife the former Elizabeth Jane Norton, and her first marriage was to Athol Shmith.

It was as Patricia Tuckwell, a violinist with the Sydney Symphony Orchestra, that she met the Earl of Harewood in 1959. Lord Harewood, the eldest grandson of King George V and Queen Mary had married Marion Stein, the pianist, in 1949, by whom he had three sons. The couple soon fell in love and the Countess of Harewood initially refused to grant her husband a divorce though she relented in 1967, three years after Patricia had given birth to his son.

The affair had constitutional repercussions. It caused a major scandal and constitutional difficulties involving the Queen herself. As supreme governor of the Church of England, the sovereign was officially unable to countenance remarriage after divorce - her permission for her cousin to marry was necessary under the terms of the Royal Marriages Act 1772. But Prime Minister Harold Wilson saved the Queen embarrassment by putting the question to the Cabinet. The Cabinet agreed and with the Queen's consent it was announced that she had acted, as a constitutional monarch had to, on the advice of her Government.

The scandal forced the Earl of Harewood to resign as Chancellor of York University, and it resulted in him being ostracised by the royal family for a long time afterwards.

Patricia and the Earl of Harewood married in the United States, on 31 July, 1967, but made their home at Harewood House near Leeds. The stately home became the Countess of Harewood's beloved home for the next fifty years.

Lady Harewood was widowed, 11 July, 2011, when the peerage passed to the earl's son from his first marriage, David Lascelles, now 8th Earl.

The countess leaves two sons, Michael Shmith, from her first marriage, and the Hon Mark Lascelles, from her marriage to Lord Harewood.

The funeral takes place at All Saints Church, in the grounds of Harewood House, near Leeds, 18 May, 2018

John Andrew Christopher Kerr was born 4 July, 1927, the second son of Capt Andrew William Kerr, RN (1877-1929), by his wife, and kinswoman, the former Marie Constance Annabel Kerr. He was raised to the rank of the younger son of Marquess in 1941, when his elder brother, Peter Kerr, succeeded as 12th Marquis on the demise of a cousin.

She was born the Hon Miranda Mary Fitzalan Howard, 1 June, 1927, third daughter of the 3rd Baron Howard of Glossop, MBE (1885-1972), a scion of the ancient House of Howard, by his wife Mona Josephine Tempest Stapleton, suo jure Baroness Beaumont. Her seven siblings all had names beginning with the letter "M". Miles, Michael, Martin, Mark, Mariegold, Miriam and Mirabel.

Her father, until his demise in 1972, was heir presumptive to his kinsman, Bernard, 16th Duke of Norfolk, Earl Marshal of England. It was her brother, Miles, who in 1975 succeeded the 16th Duke in the premier Dukedom of England, and subsequently Miranda and her siblings were elevated to the rank of children of a duke, &c.

She married 22 July, 1947, the Hon Christopher Anthony Robert Emmet, son of Mr Thomas Emmet, of Amberley Castle, by his wife the Baroness Emmet of Amberley, a life peeress, and one of the first women to sit in the House of Lords.

As Peter Temple-Morris he was Conservative MP for Leominster 1974-2001, but then changed parties and sat in the House of Lords as a Labour peer.

Posted by Michael Rhodes at Wednesday, May 02, 2018 No comments: 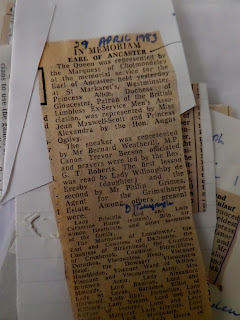 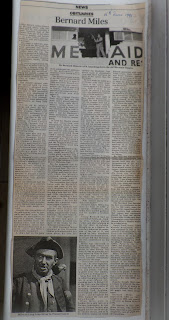 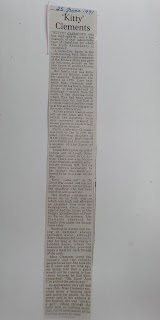 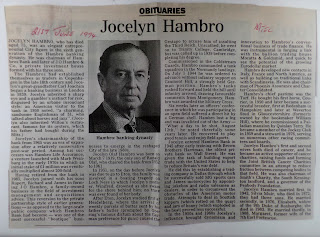 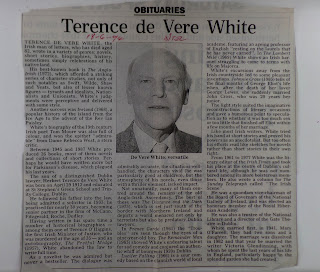 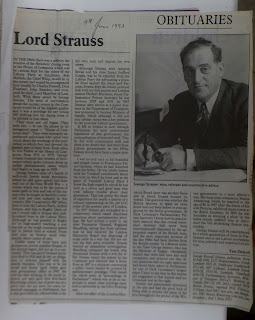 _. The marriage took place 30 April, 2018, at the Church of St Michael and All Angels, Badminton, Gloucestershire, between Henry John Fitzroy Somerset, 12th Duke of Beaufort (born 22 May, 1952), of Badminton House, eldest son of the late 11th Duke of Beaufort (1928-2017), by his first wife the former Lady Caroline Jane Thynne (1928-95), scion of the Marquesses of Bath, & Miss Georgia Powell (born 18 Feb, 1969), scion of the Powell landed family, daughter Tristram Roger Dymoke Powell (b 1940), descended from the Earls of Longford, by his wife the former Virginia Beatrice Lucas, scion of the Lucas landed family, of Oakash.

The Duke of Beaufort married firstly, 13 June, 1987, in the presence of the Princess of Wales and Duchess of York, Tracy Louise Ward (b 22 Dec 1958), scion of the Earls of Dudley, daughter of the Hon Peter Ward by his wife the former Claire Leonora Baring, by which marriage he had two sons and a daughter.

Lord O'Neill of The Maine 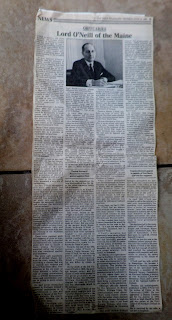