Charles is the elder son of Mr Samuel R. Morshead, of St Fillans, Perthshire and Mrs Annabelle C.E. Morshead (nee Bates), of Langley-on-Tyne, Northumberland, and Louise, scion of the Lords Saltoun (Peerage of Scotland, cr 1445), is the elder daughter of Capt Mark Malise Nicolson, of Cairbulg Castle, Fraserburgh, Aberdeenshire, by his wife the Hon Katharine Ingrid Mary Isabel FRASER, Mistress of Saltoun (b 11 Oct, 1957).
Mrs Morshead is a granddaughter of the Lady Saltoun (a peeress in her own right), and the late Capt Alexander Arthur Alfonso David Maule Ramsay of Mar, and a great-granddaughter of HRH Princess Patricia of Connaught (afterwards Lady Patricia Ramsay), and a great-great granddaughter of HRH The Duke of Connaught, son of HM Queen Victoria, &c. 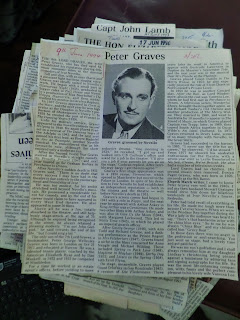 A Thanksgiving Service takes place in the garden at Apethorpe, near Peterborough, Friday 22 May, 2015.

_. Birgitte Countess of Stockton, who died 8 May, 2015, was the first wife of the 2nd Earl of Stockton (Peerage of the UK, cr 1984), grandson of the prime minister, Harold Macmillan.

She was the former Birgitte Hamilton, daughter of Alan Douglas Christie Hamilton, of Stable Green, Mitford, co Northumberland, and married the then Alexander Daniel Alan Macmillan in 1970. They divorced in 1991.

The Earldom of Stockton was conferred upon the 90 year-old Harold Macmillan in 1984 ~ the last earldom given to a commoner ~ and Alexander Macmillan succeeded to his grandfather's honours, 29 Dec, 1986, his father, Maurice Macmillan, styled Viscount Macmillan of Ovenden, having predeceased the former PM, 10 Mar, 1984, just a month after the creation of the title, &c.

Birgitte Countess of Stockton is survived by a son, Daniel, Viscount Macmillan of Ovenden, and by two daughters, Lady Rebecca and Lady Louisa.

The funeral takes place at St Mary's Church, The Boltons, 21 May.

Viscountess Clanfield is the former Matilda Rose Aykroyd (b. 1978), third daughter of David Peter Aykroyd (b. 1937), of Nun Monkton, York, scion of the Aykroyd Baronets, of Lightcliffe (created 1920), by his wife, the former (Lydia) Huldine Beamish, younger daughter of Richard Pigott Beamish, of Castleyons, County Cork (of an Irish landed family).

The infant's father - Ashton Robert Gerard Peel, styled Viscount Clanfield (b. 16 September, 1976), is the only son of the 3rd Earl Peel, PC (b. 1947), of Masham, North Yorkshire, and his first wife, the former Veronica Naomi Livingston Timpson (b. 1950), descended from the Houstoun-Boswall Baronets (now Veronica Countess Peel, of San Martin de Tesorillo, Spain).
-=-
Posted by Michael Rhodes at Thursday, May 07, 2015 No comments:

The bride~to~be is one of the godchildren of the late Diana, Princess of Wales. Her mother, Sophie, was a schoolfriend of the princess and sometime flat-mate.

Charlie Shirley-Beavan is descended from the Vestey baronets. His maternal grandmother, Margaret Payne, is a granddaughter of Sir Edmund Hoyle Vestey, 1st Baronet.

_. The marriage took place in May, 2015, in South Africa, between photographer Sacha Specker and Miss Ayesha Makim (born 1986), daughter of William Alex Makim by his former wife the former Jane Louise Ferguson (born 1957), scion of the Ferguson of Dummer landed family, and descended from the Viscounts Hampden and the Fellowes of Shottesham landed family, &c.

The bride is a niece of Sarah Duchess of York, former wife of the Queen's second son.

The elder son, who was born 6 July, 1965, succeeds as 8th Earl of Leicester. He is a former Page of Honour to the Queen and sometime equerry to Field Marshal HRH The Duke of Kent, &c.