_.TRH The Duke & Duchess of Cambridge and Prince Harry of Wales attended the marriage, 29 March, 2014, at St Mary's Church, Marshfield, Gloucestershire, between Charles George A. Budgett (b 1981), son of Mr James Budgett, of Kirtlington, Oxfordshire, by his wife the former Rosemary Delme-Murray, descended from the Dukes of Atholl & Lucy Margaret Meade (b 1985), daughter of Richard John Hannay Meade, OBE (b 4 Dec 1936), of West Littleton, Wiltshire, by his wife the former Angela Dorothy Farquhar (b 11 Jan, 1948), scion of the Farquhar Baronets (Bt, GB, cr 1796).

Johnny Jellicoe is a son of the late 2nd Earl Jellicoe, KBE (1918-2007), by his second wife, the former Philippa Dunne, scion of that landed family, and is a half~brother of the current 3rd Earl.

Katharine Jellicoe  is a daughter of Maj. Andrew Napier, of Syleham, Suffolk, and the late Mrs Napier.
--=--
Posted by Michael Rhodes at Thursday, March 27, 2014 No comments:

_. The engagement was announced 20 March, 2014, between Christian Frederick Moxon (b 1974), youngest son of the late John Frederick Moxon by his wife the Hon Jennifer Julia Fellowes (b 1940), of Abbots Ripton, Cambridgeshire, scion of the Barons De Ramsey (Baron, UK, cr 1887), and Ahalya Alvares, eldest dau of Jeevan Alvares and Rajini Furtado, of Bangalore, India.

Christian Moxon is a nephew of the 4th Baron De Ramsey.

The Duchess is survived by 5 children, one from the first marriage, and by two sons and two daughters from the second marriage.

Memorial Service at Cleish Parish Church, near Kinross, Saturday 29 March, after a family burial on 28 March.

The funeral is at St Lawrence Church,  Cucklington, Somerset, 28 March. A memorial service takes place at All Hallows by the Tower, London, 7 May.

William Wedgwood Benn was created Viscount Stansgate in 1942, and in 1944 his elder son, Ft-Lt Michael Wedgwood Benn, DFC, was killed in action.

Tony Benn petitioned to give up his viscountcy & remain in the House of Commons but failed. However, his campaigning resulted in the 1963 Peerage Act which enabled peers to disclaim their titles for life.

Under the terms of the 1963 Peerage Act the eldest son, Stephen, who was born 21 Aug, 1951, now succeeds as 3rd Viscount Stansgate.

Sir Thomas was an author (as Thomas Hinde), and his books include "For the Good of the Company", "Mr Nicholas", "Happy As Larry", "A Place Like Home", "The Cage", "Games of Chance", "The Day the Call Came", &c.

He was born 2 March, 1926, son of Sir Thomas Henry Willes Chitty, 2nd Baronet (1891-1955), by his wife the former Ethel Constance Gladstone, scion of that landed family; succeeded to the baronetcy on his father's death, 26 Feb, 1955. He married 23 Aug, 1951, Susan Elspeth Russel Glossop, writer, whose birth name was Hopkinson,
daughter of an unmarried mother, the writer, Antonia White, and of Rudolph Glossop, by whom he had issue, a son, and two daughters. The baronetcy passes to his son, Andrew Edward Willes Chitty, who was born 20 Nov, 1953.

Alexander is the second son of George Alan More Nisbett of The Drum, Edinburgh, by his wife the former Patrea MacDonald, and Lindsay is the eldest daughter of Mr and Mrs Kenneth Weitz, of Jupiter, Florida, USA.
-==--
Posted by Michael Rhodes at Monday, March 10, 2014 No comments:

_. Marion Thorpe, CBE, concert pianist, co-founder of the Leeds Piano Competition, who died 6 March, 2014, aged 87, was the first wife of the late 7th Earl of Harewood (1923-2011), a first cousin of the Queen, and later wife of the disgraced Liberal party leader, Jeremy Thorpe (descended from the Norton-Griffiths Baronets).

_. Martim Stephen Robert Elwes, who died 3 March, 2014, aged 65, was a scion of that landed family, and a nephew by marriage of HRH The Duchess of Kent. 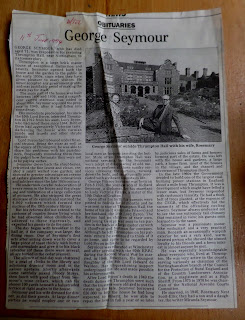 From an early age, mentally defective, she was confined to a hospital, and controversially described as deceased in editions of Burke's Peerage and Baronetage ~ so described by her mother in compiling information for the tome.

Her siblings were Patricia, who died in infancy, Anne, who married Viscount Anson, and was mother of the late Earl of Lichfield, the photographer. After Anson's death she married Prince George of Denmark. Nerissa, mentally defective like her sister, who died in 1986, and Diana, who married Peter Somervell.

Katharine's father was a brother of Her Majesty Queen Elizabeth The Queen Mother, &c, who was 2nd son of the 14th Earl of Strathmore & Kinghorne.

In 2005 he was awarded a life peerage ~ gazetted in the name, style, and title of BARON BILSTON, of Bilston in the County of West Midlands.

The peer, b. 26 Aug, 1942, the son of Mary Elizabeth Peasley and Thomas Herbert Turner; married in 1976, Patricia Mary Narroway, by whom he had 1 son and 1 daughter. He was Chairman of the H of C Catering Committee, &c.

_. The engagement was announced 5 March, 2014, getween the Hon Alexander John Leslie, Master of Rothes (b 18 Feb, 1962), scion of the Earls of Rothes (Peerage of Scot. cr 1457/8), yr brother and heir pres to the 22nd Earl of Rothes, son of the late 21st Earl of Rothes (1932-2005), by his wife the former Marigold Evans-Bevan (Marigold, Countess of Rothes, of Hampshire), & Miranda Grant, scion of the Grants of Glenmoriston, daughter of the late Ian Grant of Glenoriston, and of Mrs Ian Grant, of Dumfriesshire.