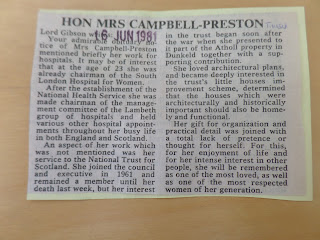 Posted by Michael Rhodes at Thursday, June 29, 2017 No comments: 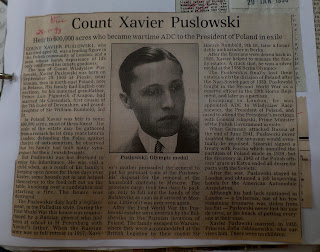 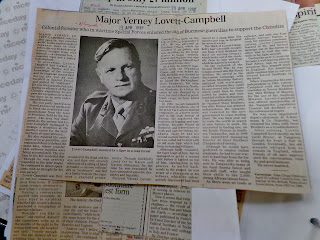 Lord Darnley married 14 Oct, 1965, Susan Elaine Anderson, fourth daughter of Sir Donald Anderson, by his wife the former Margaret Llewellyn, scion of the Llewellyn baronets, by whom he had issue, a son and a daughter.

A Thanksgiving service is to take place at Hereford Cathedral, on Friday 8 September, 2017.

Viscount Long leaves a son and a daughter from his first marriage, and another daughter died in a car accident in 1984.

The peerage passes to his only son, the Hon James Richard Long, who was born 31 Dec, 1960. 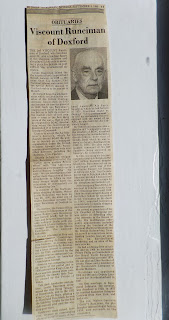 _. The Countess Mountbatten of Burma, second holder of the peerage, first cousin of the Duke of Edinburgh, died at her home at Mersham, Kent, 13 June, 2017. She was 93.

Countess Mountbatten was the last surviving godparent of the Prince of Wales.

She was born Patricia Edwina Victoria Mountbatten, 14 Feb, 1924, the elder dau of the then Lord Louis Mountbatten, by his wife the former Hon Edwina Ashley. Her father, formerly Prince Louis of Battenberg, took the surname of Mountbatten in 1917, and was later created Viscount, then Earl Mountbatten of Burma, with a special remainder to his daughters, and then to their sons.

The funeral takes place at St Paul's Church, Knightsbridge, London, on 27 June, 2017, at 3pm. No memorial service will take place.

_. The Lady Mary Holborow, who died at Ladock, 9 June, 2017, aged 80, was a scion of the Earls of Courtown, and a former Lord Lieutenant of Cornwall.

Lady Mary Christina Stopford was born in 1936, a daughter of the 8th Earl of Courtown (1908-75), by his first wife, the former Christina Margaret Cameron; married 1959, Jeremy Jermyn Holborow, OBE, who was High Sheriff of Cornwall in 1977. She leaves issue.

A private funeral is followed by a Memorial Service at Truro Cathedral, Thurs 6th July.

__. The engagement was announced 9 June, 2017, between the Hon Charles Henry Fellowes (born 1986), scion of the Barons De Ramsey, son of the 4th Baron De Ramsey (b 1942) of Abbots Ripton, Cambridgeshire, by his second wife, the former Alison Mary Birkmyre (b 1954), scion of the Birkmyre baronets, & Victoria Louise Mills (born 1987), daughter of Mr Graham A. Mills, of Guildford, Surrey, by his wife the former Jean L. Spence.

__. The marriage took place, 3 June, 2017, at the Church of St Michael & All Angels, Finmere, between Alexander Rupert Ponsonby Grimston (b 1989), scion of the Barons Grimston of Westbury, yr son of the Maj the Hon Gerald Charles Walter Grimston (b 1953), of Finmere, Oxfordshire, by his wife the former Katherine Kettle, & (Jocelyn) Octavia Wayne (born 1987), daughter of Mr William Wayne, of Stockwell, London, by his wife the former Gillian A. Blyth.

Sarah is a daughter of Lieutenant-Col Malcolm R. McVittie (b 1946), of Berwickshire, by his wife the former Susan Wendy Boissier, scion of that landed family, & Charlie Gordon Lennox is the son of Maj-Gen Bernard Charles GORDON LENNOX CB MBE (b 1932, gt gs of the 7th Duke of RICHMOND, LENNOX & GORDON) and Sally-Rose dau of John Weston WARNER. He m 1st 2000 (div 2006) Susannah Clare dau Glen HASTINGS and of Mrs Philip Stevens, of Brisbane, Australia. No issue.

Thomas Edward Bridges was born 27 Nov, 1927, the son of the 1st Baron Bridges, KG, GCB, GCVO, MC, PC (1892-1969), who had served as Cabinet Secretary throughout the Second World War, by his wife the former Hon Katharine Farrer, dau of the 2nd Baron Farrer.

His son, the Hon Mark Bridges, who was born 25 July, 1954, now succeeds as third holder of the peerage.

Posted by Michael Rhodes at Thursday, June 08, 2017 No comments:

Angela Mary Whiteley was born 28 May, 1931, second daughter of Francis George North, styled Baron North (1902-40), by his wife the former Joan Louise Burrell, scion of the Burrell baronets, and was a granddaughter of the 8th Earl of Guilford. Her brother succeeded as 9th Earl of Guilford in 1949, and a year later she was granted by Royal Licence the rank and precedence of the daughter of an earl.

Lord Braybrooke is succeeded in the family honours by a third cousin twice removed, Richard Ralph Neville, who was born in 1977.

Posted by Michael Rhodes at Wednesday, June 07, 2017 No comments:

The peerage now devolves upon his Lordship's nephew, Michael John Cokayne, who was born 28 Nov1950.

David William Perceval Cooke was born 28 April, 1935, and succeeded to the baronetcy on the demise of his father, Sir Charles, in 1978; married 1959, Margaret Frances Skinner (who d 2013), by whom he had issue, three daughters.

The baronetcy, created in 1661, now passes to his kinsman Anthony Edmund Cooke-Yarborough, who was born in 1956.

__. The engagement was announced in May, 2017, between Thomas Rice Mansel Methuen-Campbell [b 1977], scion of the Barons Methuen, son of the late Mr Christopher Paul Mansel Methuen-Campbell by his second wife, the former Judith Anne Crowther, of Penrice, Gower & Catherine Margaret Jane Fellowes [b 1977], scion of that landed family and descended from the Viscounts Hampden, daughter of Thomas William Fellowes [b 1945], of Barking, Suffolk, by his second wife, the former Rosamund Isabelle van Cutsem, scion of that landed family.

Thomas Methuen-Campbell is the half-brother of Lord Methuen.

__. Gina Fratini, the British fashion designer whose unashamedly romantic gowns were much loved by the Royal Family and celebrities, died 25 May, 2017. She was 85.

She was born at Kobe, Japan, 22 Sept 1931, as Georgina Caroline Eve Butler, scion of the Earls of Carrick, daughter of the Hon Somerset Butler, CIE (1903-62), by his wife the former Barbara Jacomb-Hood; married 1stly, 1954, David Goldberg; married 2ndly, Renato Fratini, and thirdly, 1969, James Allan Short [the actor, Jimmy Logan] - all three marriages were dissolved; a later partner was the actor/singer Anthony Newley, who died in 1997. No children. 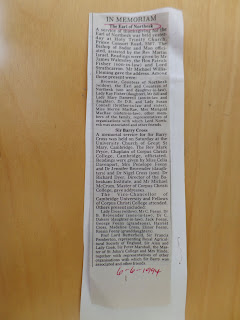 Posted by Michael Rhodes at Thursday, June 01, 2017 No comments: