The Marquis of Stafford is the elder son of the 7th Duke of Sutherland (b. 18 Feb, 1940), by his wife the former Victoria Mary Williams (descended from the Barons Addington), and the Marchioness of Stafford is a daughter of Dr Graham and Dr Ilse Schneider, of Vienna, Austria.

Death of the hereditary Standard Bearer for England (the Queen's Champion)

_.Lt-Colonel John Lindley Marmion Dymoke, MBE, DL, who died 21 March, 2015, aged 88, was head of that landed family of Scrivelsby, Lincolnshire, and was the Honourable the Queen's Champion and Standard Bearer of England in which capacity he attended the Coronation of Queen Elizabeth II, 2 June, 1953.

Sometime High Sheriff of Lincs and Vice~Lord Lieutenant of the county.

He succeded to the Lordship of the manors of Scrivelsby, Thornton and Dalderby, &c, on his grandfather's death, 29 Aug 1946. The grandfather had attended the coronations of King Edward VII and King George V and King George VI as hereditary standard bearer and King's Champion, &c.

John Dymoke married 4 Sept, 1953, Susan Cicely Fane, scion of the Earls of Westmorland, by whom he had issue. His eld nson, Francis John Fane Marmion Dymoke, who was born 19 January, 1955, now succeeds as head of the family and holder of the ancient family honours.

_. The engagement was announced 16 March, 2015, between James Chichester, styled Earl of Belfast (born 19 Nov, 1990) (scion of the Marquesses of Donegall, cr 1791, Peerage of Ireland), son and heir of the 8th Marquess of Donegall (b 9 May 1952), of Roxburghshire, by his wife the former Caroline Mary Philipson, & Oilbhe Cahill Reid, daughter of the late Mr Charles Reid and Dr Mairead Cahill and step daughter of Mr James Watson, ,of Roscommon.

The couple married 11 May, 2013. Alexander T. John is the son of Mr & Mrs Trevor John, of Bath, and Kate, a kinswoman of the Duke of Cambridge  &  Prince Harry of Wales, via her descent from the Earls Spencer, is a daughter of Richard Anthony Wake-Walker (b 25 July, 1951), of London, by his wife the former Sharon Pamela Little.

Charles Gordon-Watson is a son of the late Brigadier David Michael Lindsay Gordon-Watson, OBE, MC (1913-2002), by his wife the former Thalia A.R. Gordon, of East Blagdon, Cranborne, Dorset & Kate Reardon (editor of Tatler), is the only daughter of Mr Patrick Reardon, of Montgomery, Wales, and Mrs Humphrey Wood, of Roborough, Devon, and Parsons Green, London.

Bloodstock agent Charlie Gordon-Watson is a first cousin of the Duchess of Beaufort, of Badminton, Avon. 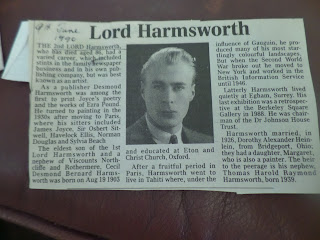 Posted by Michael Rhodes at Wednesday, March 04, 2015 No comments:

Jack's grandmother, the Hon. Janet Aitken (dau of the 1st Baron Beaverbrook), was the wife, between 1927 and 1934, of Ian Douglas Campbell, later 11th Duke of Argyll. Before settling on Jack's grandfather, Maj. Thomas Kidd, Janet's second husband was the Hon. William Montagu, son of the 9th Earl of Sandwich.

Jack's sister is the Marchioness of Douro, wife of the Duke of Wellington's heir.

Orlando Fraser is a grandson maternally of the 7th Earl of Longford, KG, and Clementine Hambro, a bridesmaid at the marriage of the Prince of Wales and Lady Diana Spencer, 29 Jul, 1981, is a granddaughter maternally of the late Baron Soames, by his wife Baroness Soames, LG (nee Spencer-Churchill), daughter of Sir Winston Churchill, KG, &c.