_. Katherine Viscountess Macmillan of Ovenden, DBE, who died 22 January, 2017, aged 96, was the daughter-in-law of one Prime Minister and the great-granddaughter of another.

Lady Macmillan was the daughter-in-law of Prime Minister Harold Macmillan [1st Earl of Stockton, cr 1984] & was a scion of the Barons Harlech [cr UK, 1876].

She was born Katherine Margaret Alice Ormsby-Gore, in 1921, a daughter of the 4th Baron Harlech, KG, GCMG, PC (1885-1964), by his wife the former Lady Beatrice Edith Mildred Gascoyne-Cecil, DCVO, daughter of the 4th Marquess of Salisbury, who was son of Queen Victoria's last PM, the 3rd Marquess, &c.

Katherine married in 1942, Maurice Victor Macmillan, son of Harold Macmillan. Her husband, a Conservative MP & government minister, received the courtesy title Viscount Macmillan of Ovenden in 1984 when his father, aged 90, was ennobled with the Earldom of Stockton. Maurice Macmillan died shortly afterwards, two years before the passing of the 1st Earl of Stockton.

Viscountess Macmillan leaves two sons, Alexander, 2ho succeeded his grandfather as 2nd Earl of Stockton, and the Hon David Macmillan, & was predeceased by two sons, Joshua and Adam, and by a daughter, Rachel.

He was born 29 May, 1938, son of James Franklin MacMahon Bland, and was educated at Sedbergh; married 1981, Jennifer Mary, Viscountess Enfield [ex wife of Thomas Byng, styled Viscount Enfield] [later 8th Earl of Strafford] daughter of the Rt Hon William May, MP, of Mertoun Hall, Hollywood, Co Down, by whom he had issue, a son, Archie, a journalist on the Guardian newspaper.

He married in 1964, Susanna Elizabeth Debenham (b 1943), scion of the Debenham baronets [Bt, UK, cr 1931], by whom he had issue, two daughters. He also leaves a daughter from his relationship with Emily Bearn.

He was born in 1932, son of Vice-Admiral Richard Benyon, CB, CBE (1892-1968) (who had assumed the surname of Benyon in lieu of Shelley in 1967), by his wife the former Eve Alice Cecil, a descendant of the Marquesses of Salisbury.

_. Tam Dalyell, who died 26 January, 2017, aged 84, was a tenacious Labour MP known for the 'West Lothian question' - who was Sir Thomas Dalyell of the Binns, 11th Baronet {but did not use the title}.

He was born 9 Aug 1932, son of Lt-Col Gordon Loch, CIE, DL, JP, by his wife (Dame) Eleanor Isobel Dalyell of the Binns (de jure Baronetess). His parents assumed the surname & arms of Dalyell of The Binns (officially recognised by the Lord Lyon King of Arms); he succeeded his mother as 11th baronet upon her death in 1972 and in 1973 he successfully established his claim to the baronetcy but decided not to use the title.

He was elected Labour MP for West Lothian in 1962; became Father of the House of Commons in 2001; he left the Commons at the General Election in 2015, &c.

Tam Dalyell married in 1963, the Hon Kathleen Mary Agnes Wheatley, daughter of the life peer Baron Wheatley, by whom he had issue. He is succeeded in the baronetcy by his only son, Gordon Wheatley Dalyell, who was born 26 September, 1965.

Kezia Acloque is a daughter of Mr Alan Kelsey, of London, and Mrs Sarah Kelsey, of Chelsworth, Suffolk.

_. The Dowager Marchioness of Anglesey, DBE, LVO, who died 21 January, 2017,aged 92, was for over 60 years the chatelaine of Plas-Newydd, Anglesey, the Paget family seat. She was the widow of the 7th Marquess.

She was born Elizabeth Shirley Vaughan Morgan, daughter of Charles Langbridge Morgan, of London, by his wife the former Hilda Vaughan; married 16 Oct, 1948, George Henry Victor Paget, 7th Marquess of Anglesey (1922-2013), who had inherited the family honours a year earlier. Her husband, who was Lord Lieutenant of Gwynedd, 1983-89, died 13 July, 2013.

The private funeral is to take place at St Edwen's Church, Llanedwen, Anglesey.

_. Thomas Barrington Cubitt, who died 19 January, 2017, aged 87, was a scion of the Cubitt landed family [from whom descend the Barons Ashcombe & HRH The Duchess of Cornwall] . He was late the Grenadier Guards [Capt].

He was born 6 Sept, 1929, son of Maj Charles Cyril Cubitt, by his wife the former Gladys Louisa Violet Crake; married 24 Sept, 1959 [div 1985] Jennifer Margaret Chaytor, scion of the Chaytor baronets, by whom he had issue.

Memorial Service to be held at Our Lady of Lourdes, Hungerford, 3 Feb, 2017.

_. The Hon Emma Tennant, who died 20 January, 2017, aged 79, was much married novelist and scion of the Barons Glenconner.

Emma Tennant leaves a son from her first marriage, the author Matthew Yorke, a daughter, Daisy, from her third marriage, and a daughter, Rose, from her relationship with the publisher Michael Demspey.


Posted by Michael Rhodes at Tuesday, January 24, 2017 No comments:

_. The 1st Earl of Snowdon, GCVO, society photographer and sometime brother-in-law of Her Majesty The Queen, died 13 January, 2017. He was 86.

He was Constable & Gov of Carnarvon Castle, and appointed GCVO in 1969 after the investiture of the Prince of Wales.

Lord Snowdon, in 1999, was created a life peer as Baron Armstrong-Jones, of Nymans in the County of West Sussex.

A service of Thanksgiving for the life of the Earl of Snowdon is to take place at St Margaret's Church, Westminster Abbey, Friday 7 April, 2017.

Lord Lyell was unmarried and the peerage now becomes extinct.

_.John Ralph Stourton, who died 5 January, 2017, aged 86, was a scion of the Barons Mowbray, Segrave & Stourton, and a cousin of England's Premier Baron.

A Service of Thanksgiving is to be held at Christ Church, East Stour, Gillingham, Dorset, 28 January, 2017.
Posted by Michael Rhodes at Thursday, January 12, 2017 No comments: 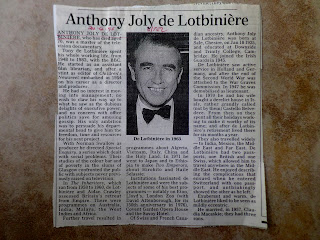 Posted by Michael Rhodes at Thursday, January 12, 2017 No comments:

_. The Lady Anne-Louise Hamilton-Dalrymple, who died at her home, at Leuchie, North Berwick, East Lothian, 7 January, 2017, aged 84, was the wife of  Sir Hew Fleetwood Hamilton-Dalrymple, GCVO, 10th Baronet (b 9 Apr 1926), and was a scion of the Earls of Albemarle.

Posted by Michael Rhodes at Wednesday, January 11, 2017 No comments:

_. Ralph Newman Gilbey, who died at Yeovil, 22 December, 2016, aged 91, was a scion of the Gilbey baronets, and father of James Gilbey, Princess Diana's "Squidgy".

He was born 2 March, 1925, second son Francis Newman Gilbey, OBE, by his wife the former Mary Jump; married 10 Oct, 1949, Barbara Scott, by whom he had issue, three sons, Thomas, Francis and James, and a daughter, Helen.

The funeral ~ a double funeral with that of his son Francis who survived him by only a week ~ is to take place at the Church of St Luke & St Teresa, Wincanton ~ on 16 January, 2017.

She was the former Patricia Kathleen Schofield, daughter of William Edward Schofield, of West Malling, Kent, and married Robert Ropner in 1943. He succeeded his father as 4th baronet in 1962, and died 12 January, 2004.

_. Colonel Henry Owen Hugh Smith, The Blues & Royals, who died 1 December, 2016, aged 79, was a distant cousin of HM The Queen, and a scion of the Smith landed family, formerly of Midhurst.

__. Mr Christopher John Reith, who died 23 October, 2016, aged 88, was the son of Lord Reith, first Director General of the BBC, & he disclaimed this barony for life on his father's demise.

Christopher Reith disclaimed the barony of Reith for life, 21 April, 1972. He married in 1969, {Penelope} Margaret Ann, elder dau of the late Henry Rowland Morris, of Beeston, Nottinghamshire, by whom he had issue, a son James, and a daughter, Julie. The son, born 2 June, 1971, succeeds as 3rd Baron Reith.

From the Telegraph and Times of 14 December 2016: SALISBURY  Marjorie Olein, Dowager Marchioness of Salisbury, peacefully at home. Beloved mother, grandmother and great-grandmother. Born 15th July 1922: died 12th December 2016. The funeral will take place at midday on Saturday, 17th December at Hatfield Parish Church. There will be no memorial service. Flowers welcome, to be delivered to Hatfield House.

She was d of Capt Hon Valentine Maurice WYNDHAM-QUIN (1890-1983), scion of the DUNRAVEN and MAYO earls, and Marjorie Elizabeth PRETYMAN (1897-1969), scion of the BRADFORD & SCARBROUGH earls, etc etc. She me 1945 the 6th Marquess of SALISBURY and had six sons and a dau.

The Telegraph have been quick to produce her obit: http://www.telegraph.co.uk/obituaries/2016/12/13/dowager-marchioness-salisbury-garden-designer-obituary/
Posted by Michael Rhodes at Monday, January 09, 2017 No comments:

From the Telegraph of 10 December 2016: LONGMAN Elizabeth Mary (née Lambart) died peacefully at home on 8th December 2016, aged 92. Dearly loved mother of Caroline, Jane and Emma, grandmother and great-grandmother. Funeral at St John's Church, Bishopstone, near Salisbury SP5 4AS at 12 noon on Tuesday 20th December. No flowers. Donations, if desired, to RSPB.

Queen MARY and The Princess ROYAL, Countess of HAREWOOD were godparents and she was a bridesmaid at the wedding of The QUEEN (who is godmother to Lady Elizabeth's eldest dau). As was Hon Mary Rhodes, news of whose death we posted recently.
Show trimmed content

From the Telegraph of 21 December 2016: OAKELEY  Sir John Oakeley, Bart, aged 84, passed away peacefully on 19th December 2016. An International yachtsman who represented GB in the Mexico '68 and Munich '72 Olympics; world champion in a multitude of dinghies and keelboats during his long and successful career. Beloved husband, father and grandfather. A great man who will be dearly missed. For details regarding funeral arrangements please email oakeleyfamily@gmail.com.

[Sir] Robert John Atholl OAKELEY [9th Bt] (b 1963), has yet to establish his claim and appear on The Roll of the Baronetage. He m 1989 Catherine Amanda d of William KNOWLES FRCS and had issue:

https://en.wikipedia.org/wiki/Marion_Fraser
Posted by Michael Rhodes at Monday, January 09, 2017 No comments:

_. Charles Belloc Lowndes, who died tragically, 20 Dec, 2016, aged 49, was a scion of that landed family, son of Richard Belloc Lowndes by his wife the former Charlotte Anne Formby, father for Kiki and Hen. Former husband of Portia.

The engagement was announced 2 January, 2017, between James William Campbell Adamson (b 1989), son of Hugh A. Campbell Adamson, of Stracathro, Angus, by his wife the former Hon Alison Mary Elliott (b 1957), daughter of the life peer Baron Elliott of Morpeth, & Miss Hannah G. de Haan (descended from the Earls of Plymouth), twin daughter of Mr Archer de Haan and Mrs Vivien de Haan, of Bromfield, Shropshire.

The funeral takes place at the Church of Sacre-Coeur in Ouchy, Lausanne, on Wednesday 4 January, 2017.

From the Telegraph and Times of 5 January 2017: Mr A. Lord and Lady Philippa Howard - The engagement is announced between Archie, younger son of Mr and Mrs Peter Lord, of Ecchinswell, Hampshire, and Philippa, elder daughter of the Earl and Countess of Suffolk and Berkshire, of Charlton Park, Wiltshire.

_. Viscountess Weymouth, wife of Viscount Weymouth, son and heir of the Marquess of Bath, had a son (by a surrogate mother) the Hon Henry Richard Isaac Thynn, born at Beverly Hills, California, USA, 30 Dec, 2016. 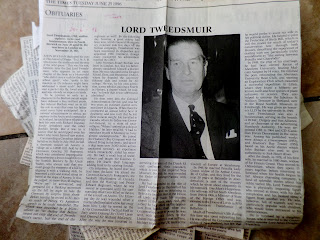 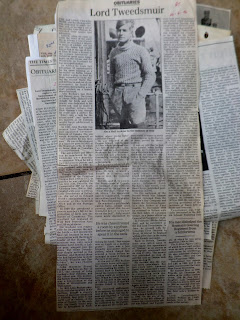 Posted by Michael Rhodes at Friday, January 06, 2017 No comments: 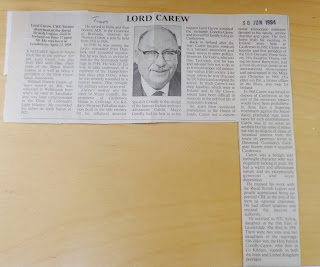 Posted by Michael Rhodes at Wednesday, January 04, 2017 No comments: 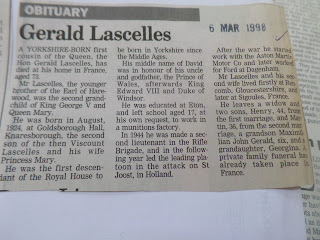 Posted by Michael Rhodes at Tuesday, January 03, 2017 No comments: