_. Sir Anthony Bellingham, Baronet, who died in August, 2015, was the 8th holder of the baronetcy, of Castle Bellingham, Co Louth, created in 1796.

Anthony Edward Norman Bellingham (pronounced 'Bellinjum') was born 24 March, 1947, the second son of Sir Roger Bellingham, MB, ChB, DA, 6th Baronet (1911-73), by his wife the former Mary Norman. He succeeded to the baronetcy on the death of his elder brother, Sir Noel, the 7th baronet, in 1999.

His ancestor, Sir William, sometime secretary to the prime minister, William Pitt, and afterwards a commissioner for the Navy, was awarded a baronetcy, 19 Apr, 1796.

Sir Alan, the 4th baronet, married Lady Constance Noel, daughter of the 2nd Earl of Gainsborough, and descended from King William IV from his liaison with the actress Dorothy Jordan.

Sir Anthony was twice married. His first wife, whom he wed in 1991, was Denise Marie Elizabeth Moity. They divorced in 1998. He married secondly, in Thailand 1998 (div 2001), Namphon Buchar.

He leaves a son from the first marriage, William Alexander Noel Henry Bellingham, who now succeeds as the ninth baronet. He was born 19 August, 1991.

Thomas Troubridge  died 12 December, 2015. He was aged 75. He was a scion of the Troubridge baronets, and first husband of Princess Michael of Kent.

The peerage and baronetcy now devolve upon his elder son, the Hon John Patrick Christian Parnell, who was born 17 March, 1959.

A Service of Thanksgiving will be held at Salisbury Cathedral, Wednesday 3 Feb, 2016.

She is survived by two children from her first marriage, Camilla MacDonnell and Stephen Geddes.

Princess Tatiana is descended from the last German Emperor, Wilhelm II, and thus from Queen Victoria, &c.
Posted by Michael Rhodes at Thursday, December 10, 2015 No comments:

_. Briony McCorquodale (aka Briony Brind, the ballerina) who died 3 December, 2015, at Home Farm, Camfield Place, Hatfield, was the wife of Ian Hamilton McCorquodale (b 11 Oct 1937), scion of that landed family.

She was born Briony Brind, daughter of Roger and Jenni Brind, and married circa 2000, as his second wife, Ian McCorquodale, son of Hugh McCorquodale (1898-1963), by his wife the writer Dame Barbara Cartland. Ian McCorquodale is a brother of Raine, Countess Spencer, step-mother of Diana, Princess of Wales, &c.

He was born 1 Feb, 1932, son of Lt-Col Sir Neil Edward Johnson-Ferguson, 3rd Baronet; was educated at Ampleforth, & Trinity College, Cambridge; married 1964, RosemaryTeresa, yr daughter of the late Cecil John Whitehead, of Edenbridge, by whom he had issue, three sons. He succeeded to the baronetcy (cr UK, 1906), upon the demise of his father, 1992.

The baronetcy now passes to his eldest son, Mark Edward Johnson-Ferguson, who was born 14 Aug, 1965. 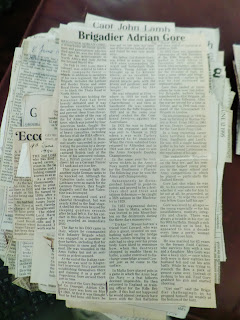 Posted by Michael Rhodes at Wednesday, December 09, 2015 No comments: