She was born 30 January, 1926, as Elizabeth Sandra Holton, daughter of Frederick Holton, of Tilehurst, near Reading, by his wife Ethel. She was briefly engaged to Peter Sellers, and married 1stly, D.H Parker, a RAF pilot, from whom she was divorced; married 2ndly, 17 Aug, 1956, Col Sir Guy Campbell, Bt, who died in 1993. She leaves two sons from her second marriage, Sir Lachlan Campbell, 6th Baronet (b 9 Oct 1958), an artist and illustrator, and Rory Campbell (b 1961), the actor and opera singer.

_.The engagement was announced 28 February, 2013, between Edward John Beckett, 5th Baron Grimthorpe (b 20 Feb 1954), (Baron, UK, cr 1886), elder son of the late 4th Baron Grimthorpe (1915-2003), of Westow Hall, York, by his wife the former Lady Elizabeth Lumley, DCVO (b 22 Jul 1925), daughter of the 11th Earl of Scarbrough, & Mrs Emma Benyon (nee Villiers, b 16 Oct 1963), scion of the Earls of Clarendon (Earl, GB, cr 1776) (third daughter of Capt Anthony Henry Heber Villiers (b 1921), by his wife the former Rosemary Elizabeth Bell (b 1924), descended from the extinct Barons Barrymore.
Lord Grimthorpe and Mrs Benyon both have previous marriages. Mrs Benyon was divorced in 2003 from Richard Benyon, now Tory MP for Newbury, and a descendant of the Shelley Baronets.

Posted by Michael Rhodes at Thursday, February 28, 2013 No comments:

_.Lord Sandys, the 7th Baron, sometime Deputy Chief Whip in the House of Lords (Captain of the Yeoman of the Guard) in the administration of Margaret Thatcher, died at his home, 11 February, 2013. He was 81.

Richard Michael Oliver Hill was born 21 July, 1931, descends from Mary Sandys, wife of the 2nd Marquess of Downshire, who was raised to the peerage of the UK in 1802, as Baroness Sandys, with a special remainder allowing the title to pass, on her demise, to her second son.

He married in 1961, Patricia Simpson Hall, daughter of  Capt Lionel Hall, of Lower Beeding, Sussex. There were no children of the union. The barony now devolves, under the terms of the special remainder, upon his distant cousin, the 9th Marquess of Downshire (who was born 4 Feb, 1959).

Miss Fox-Pitt is an old friend of the Duchess of Cambridge and was present at the Royal wedding in April, 2011.

General Worsley leaves a widow, his two children, Henry and Charlotte, and two step-children, David, styled Earl of Southesk (b 1961) and Lady Alexandra Etherington (b 1959).
Posted by Michael Rhodes at Tuesday, February 26, 2013 No comments:

_.Alice Amaryllis Gibson-Watt (nee Montagu Douglas Scott), who has died aged 34, was a scion of the Dukes of Bucceluch & Queensberry (Duke, Peerage of Scot, cr 1684).

Old Etonian Trevor Wilford Boteler, who died at Long Island, New York, 16 February, 2013, aged 62, was scion of the landed family of Boteler, formerly of Eastry, Kent. He was born 5 March, 1950. He could trace his lineage back to John Boteler, of Sandwich, Kent, Mayor of Sandwich in 1440.

_. Jonathan Gray Ropner, who died at his home, 14 February, 2013, aged 81, was a scion of the Ropner Baronets, of Preston Hall (Bt, UK, cr 1904). Mr Ropner, of Patrick Brompton, near Bedale, North Yorkshire, was born 1 May, 1931, son of Sir William Guy Ropner, Knt (1896-1971), a director of the family shipping firm, by his wife the former Margarita Gray (died 1973), a daughter of Sir William Cresswell Gray, 1st Baronet; educated at Harrow;  lieut, Irish Guards. He married 31 Oct, 1953, Edith Avril Peat, daughter of Charles Urie Peat, MC, of Wycliffe Hall, Barnard Castle, Co Durham, by whom he had issue, 4 sons and 1 daughter. A memorial service will take place at Ripon Cathedral on 18 May.

Lady Rix, a charity campaigner for many years, appeared in the TV shows Blackadder, Fawlty Towers, Dr Who, &c, and made a fine partnership with her husband Brian in the famed Whitehall farces.

She was born 12 April, 1929, as Elspet MacGregor-Gray, daughter of James MacGregor-Gray, of Surrey, and married in 1949, the actor Brian Rix, CBE, who was created a life peer in 1992, as Baron Rix, of Whitehall in the City of Westminster. She was the mother of 2 sons, James and Jonathan, and 2 daughters, Shelley and Louisa. Her elder daughter predeceased her in 2005.

_.Elizabeth Demetriadi (nee Kerr), who died in Cumbria, 16 February, 2013, aged circa 94, was a scion of the Marquesses of Lothian (Peerage of Scotland, cr 1701). She was born in 1919, a daughter of Maj Basil Kerr, DSC (1879-1957), by his wife the former Winifred Katharine Blezard (d 1974), of Eccleston Paddocks, Chester, a granddaughter maternally of the 7th Viscount Chewynd; married 26 June, 1946, Lieutenant-Col George Demetriadi, MBE, elder son of George Constantine Demetriadi, of Manley Knoll;, Manley, Cheshire.

James is the elder son of Anthony Duckworth-Chad, of Pynkney Hall, Norfolk, High Sheriff of Norfolk, 1992, by his wife Elizabeth Sarah Wake-Walker (a granddaughter of the 7th Earl Spencer).

Lady Laura is the elder daughter of the 9th Earl of Arran, of Castle Hill, Devon, by his wife the Countess of Arran (the former Eleanor van Cutsem). Major James Duckworth-Chad is a second cousin of the Duke of Cambridge and Prince Harry of Wales.
--
Posted by Michael Rhodes at Saturday, February 16, 2013 No comments:

She was born Angela Hampden-Ross, daughter of Sydney Hampden-Ross, FCA, FSAA, of Shek-O, Hong Kong, and married Capt Bromley-Martin as his second wife in 1949.There were two sons of the marriage, Robin and Michael.

Posted by Michael Rhodes at Wednesday, February 13, 2013 No comments:

_, John Vivian Auchmuty Musters, Commander, RN, who died in Nelson, New Zealand, 10 Feb, 2013, aged 95, was a scion of the landed family of Chaworth-Musters of Annesley Park, near Nottingham. He was born 7 May 1917, the eldest son of John Domville Auchmuty Musters, Capt RN, DSC (b 1982), of Claremorris, Co Mayo, by his 1st wife, the former Olga Gertrude Helena Barnes, He joined the Royal Navy in 1935, served in WWII, was mentioned in despatches. Married 11 Sept, 1943, Ann Rosemary Garbett, dau of Capt Leonard Garbett, CBE, RN, of Stretton Grandison, Ledbury, Herefordshire, by whom he had issue, 2 sons and 2 daughters.

Charles is the only son Richard Charles Roundell (b. 11 Feb 1944), head of the family, descended from the Earls of Dysart, by his wife the former Anthea Frances Legge (b. 15 May,1946), scion of the Earls of Dartmouth, & Candice is a daughter of of Mr and Mrs Robert Zehnder, of Nanteuil-en-Vallée, France.

Charles's sister Laura is Countess of Burlington/Marchioness of Hartington, wife of the heir to the Duke of Devonshire.

Alexander Fellowes, cousin of the Duke of Cambridge and Prince Harry, to wed Alexandra Finlay

Alexander Fellowes is a first cousin of the Duke of Cambridge and Prince Harry.

Her first husband succeeded his father as 3rd Viscount, 30 Sept, 1952, and they divorced the following year. She married 2ndly, 17 Apr 1953 (div 1965), as his 1st wife, Lt-Col Thomas Michael Baring, scion of the Barons Northbrook (Peerage of the UK, cr 1866). She is survived by a son from the first marriage, William Waldorf Astor, 4th Viscount (born 27 Dec 1951), and by an adopted son, Edward, from the second marriage. 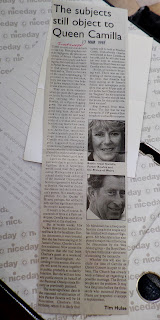 Posted by Michael Rhodes at Wednesday, February 06, 2013 No comments:

Rollo is the youngest son of Mr Michael Christian Wigan (born 1945), head of the family, of Chelsea, London, SW3, by his former wife Mrs John Loudon (nee Eugenie Mary Felicity Cadbury, b 1948), scion of the confectionary dynasty, of Pusey, Oxfordshire.

Kathryn Wigan is the eldest daughter of the Hon John and Mrs Allsopp, of Wadwick, Hampshire, and is a granddaughter of the 5th Baron Hindlip (Peerage of the UK, cr 1886).

The funeral is at the Church of St Michael and All Angels, Middleton Tyas, 7 Feb, 2013.

It is Mr Lascelles's 2nd marriage. He married Alexandra Morton in 1979, which marriage was dissolved.

_.The engagement was announced 2 Feb, 2013, between (Henry) Joseph Parente (born 1983), descended from the extinct Dukes of Portland, only son of William Henry Marcello Parente (b 18 Feb 1951), of Welbeck, Nottinghamshire, by his wife the former Alison J. Swan, & Miss Anuszka Elland, daughter of the late Mr Mark Elland and Mrs Ursula Elland, of Nether Langwith, Nottinghamshire.

Joseph Parente is a grandson paternally of Don Gaetano Parente, Principe di Castel Viscardo (b 1909-  d), by his wife the former Lady Victoria Margaret Cavendish-Bentinck (1918-55), a daughter of William Cavendish-Bentinck, 7th Duke of Portland (1893-1977), by his wife the former Ivy Gordon-Lennox (1887-1982), scion of the Dukes of Richmond & Gordon, &c.

William Russell is the elder son of Mr & Mrs Dudley Russell, of Norcote, Gloucestershire, & Henrietta, scion of that landed family of Woodbastwick, Norfolk, is 1st dau of Henry Greville Cator (b 26
Mar 1956), of Salhouse, Norfolk, by his wife the former Sara Elizabeth Keeling (b 6 Jul 1954), a granddaughter maternally of Sir John Hanbury-Williams (1892-1965), by his wife the former Princess Zenaida Cantacuzene, a daughter of Maj.-Gen. Prince Michael Michaelovich Cantacuzene, 2nd Count Speransky and Julia Dent Grant, eldest grandchild of US President Ulysses S. Grant.
-=-
Posted by Michael Rhodes at Saturday, February 02, 2013 No comments:

The peerage now devolves upon his elder son, the Hon Christopher David Peter Seely, who was born 1 Oct, 1974.

The funeral takes place at the Church of St Peter, Hever, Kent, 12 Feb.

The bride-to-be is descended from the Barons Wynford and the extinct Barons Emly.