__.The marriage took place 21 January, 2016, at St Martin's Chapel, Maristow, between (Ian) Abram Lyle (b 1968), scion of the Lyle baronets, eldest son and heir of Sir Gavin Lyle, 3rd Baronet (b 1941), of Glendelvine, Caputh, Perthshire, and the late Lady Lyle, & Lorna Violet Lopes (b 1979), scion of the Barons Roborough, a daughter of the Hon George Lopes, of Gnaton Hall, Yealmpton, Devon, by his wife the former Hon Sarah Violet Astor, a daughter of the late 2nd Baron Astor of Hever. 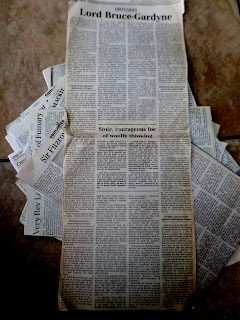 Posted by Michael Rhodes at Monday, January 25, 2016 No comments:

Isabella Alexandra May Windsor (b 2016)

Lord Frederick Windsor is the only son of HRH Prince Michael of Kent, and is a great-grandson of King George V and Queen Mary.

Lord Suffield leaves two daughters from his second marriage. The family honours now pass to his younger brother, the Hon John Harbord-Hamond, who was born in 1956.
-=-
Posted by Michael Rhodes at Tuesday, January 19, 2016 No comments:

She was widowed in January, 1998. She leaves issue, two sons, Richard and Alexander, and one daughter, Tessa.

Damian Aspinall's father was later wed to the Lady Sarah Marguerite Curzon (b 1945), a daughter of the 5th Earl Howe. A sister, Amanda Aspinall, was wife of Cosmo Fry [see Londonderry M] and later wife of Daryl Hall, the musician/singer [Hall & Oates] &c.

Aspinall has two daughters to Louise Sebag-Montefiore and one daughter from his relationship with Donna Air.

_. Mary Joan Birkbeck, who died 8 January, 2016, aged 84, was a scion of that landed family, and a descendant of King William IV by his mistress, the actress Dorothea Jordan,

Miss Birkbeck was the winning trainer of the Waterloo Cup in 1973.

George Beaumont is a grandson paternally of the Baron Beaumont of Whitley, life peer, scion of the Viscounts Allendale. George's mother is a granddaughter of Col Sir Henry Abel Smith, KCVO, by his wife the former Lady May Helen Emma Cambridge, daughter of the 1st (and last) Earl of Athlone by his wife Princess Alice of Albany, daughter of HRH The Duke of Albany, Queen Victoria's youngest son, &c.

Lord Erne was a godson of King George VI. He served the Queen as a Page of Honour, 1952-54, and was Lord Lieutenant of County Fermanagh, appointed KCVO in 2012.

Capt Billy Morley's mother is a former girlfriend of the Prince of Wales. His father is a brother of the Duchess of Beaufort. The bride~to~be is a sister of Kirstie Allsopp, the tv presenter, &c.