_. The engagement was announced 26 September, 2015, between Simon David Ramsay, styled Lord Ramsay [born 1981], son and heir of the 17th Earl of Dalhousie [b 1948], (Peerage of Scotland, cr 1633), of Brechin, Angus, by his wife the former Marilyn Davina Butter [b 1950], scion of that landed family, & Kaitlin Marie Kubinsky, daughter of Mr & Mrs John Kubinsky, Sr, of Charlotte, North Carolina, United States,

George Askew [a former contestant on the reality TV show "Big Brother"] is a grandson of Maj John Marjoribanks Askew, Grenadier Guards, by his wife the former Lady Susan Alice Egerton [1913-2010], scion of the Earls of Ellesmere, dau of the 4th Earl of Ellesmere [ 1872-1944], by his wife the former Lady Violet Lambton.  Lady Susan was a sister of the late 6th Duke of Sutherland [1915-2000], &c.

. The engagement was announced 26 September, 2015, between Matthew G. Bell, only son of Dr Nicholas Bell, and Ms Andrea Lechner, & Amber Guinness [born 1989], scion of the Barons Moyne [Baron, UK, cr 1932], eldest dau of the late Hon Jasper Jonathan Richard Guinness, by his wife the former Camilla Alexandra Uniacke, and a granddaughter of the 3rd Baron Moyne [b 16 Mar 1930]. 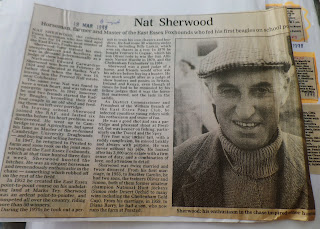 Posted by Michael Rhodes at Thursday, September 24, 2015 No comments:

_. Rosemary McCorquodale, who died 21 September, 2015, aged 91, was the widow of the late Alastair McCorquodale [1925-2009], scion of that landed family, and was the mother~in~law of Lady Sarah Spencer, sister of Diana, Princess of Wales, &c.

Thomas Legard is a son of James Digby Legard (b 1946), of Lowthorpe, East Yorkshire, by his wife the former Daphne West, and Elizabeth is the youngest daughter of Philip Nigel Aubrey-Fletcher (b 1944), of Hampshire, by his former wife the former Susan Anne Bathe (now Mrs Sue Clement, of the Isle of Wight).
====
Posted by Michael Rhodes at Saturday, September 19, 2015 No comments:

The funeral takes place at Kirkaldy Crematorium, 1st Oct, 2015, followed by a service of thanksgiving at Crail Parish Church.

Mr Nicholson is the son of Mr James Nicholson and Mrs Sally Nicholson, of Kirtlington, Oxfordshire.

Emily Nicholson is a great-granddaughter of Sir Winston Churchill, scion of the Dukes of Marlborough, daughter of Mr James N.M. MacManus, of London, by his former wife the Hon Emma Mary Soames (b 9 Sept, 1949), a dau of the late Baron Soames (life peer) by his wife the former Mary Spencer-Churchill (Baroness Soames, LG), last surviving child of Sir Winston Churchill, KG, by his wife the former Clementine Hozier [Baroness Spencer-Churchill], &c.
-=-
Posted by Michael Rhodes at Saturday, September 19, 2015 No comments:

_. Nathaniel Kevin [Nat] Billington, the computer entrepreneur who designed the systems for No 10 Downing Street, Sky TV and the NHS, died from cancer, 1 September, 2015. He was 44.

The bride to be is a granddaughter maternally of Baudouin de Marotte de Montigny [1894-1973], by his wife the Comtesse Elisabeth de Liedekerke de Pailhe [1897-1993].

Viscount Campden is the only son and heir of the 6th Earl of Gainsborough (b 17 Jan 1950) by his wife the former Sarah Winnington (scion of the Winnington Baronets), and sometime Lady-in-Waiting to Diana, Princess of Wales, &c.

Grandson of Earl Mountbatten of Burma weds for second time

Posted by Michael Rhodes at Tuesday, September 08, 2015 No comments:

Shamus Ogilvy is the elder son of the Hon James Donald Diarmid Ogilvy (b 28 Jan 1934), of Sedgebrook, Lincolnshire, by his late wife the former Magdalen Jane Ruth (June) Ducas (b 2 June 1938, d 3 Nov 2001), descended from the Barons Mowbray, Segrave and Stourton.

The infant is a great-nephew of the late Rt Hon Sir Angus Ogilvy, who, in 1963, wed Princess Alexandra of Kent, a first cousin of the Queen.
--==--
Posted by Michael Rhodes at Tuesday, September 08, 2015 No comments:


Sam, the jockey, friend of the young royals, is a son of Robert Bernard Waley-Cohen (b 1948) by his wife the Hon Felicity Samuel, dau of the 3rd Viscount Bearsted & Annabel is a daughter of Bertie Ballin and his wife Serena.

The Duchess of Cambridge attended the Waley-Cohen's marriage in June 2011.

The Worsley-Taylor baronetcy became extinct on the demise of her father in 1958. The 3rd Bt was divorced from Annette's mother and married in 1950, as his 2nd wife, Col Sir William Edmund Jaffray, 4th Baronet, who d 1953.

He was born at Worthing, Sussex, 6 January, 1931, son of Ted Kavanagh, a writer for the radio and creator of "It's That Man Again" a vehicle for the comedian Tommy Handley.

He leaves a widow and a son and daughter from his first marriage and a son from his second marriage. The elder son, the Hon Ralph Douglas-Scott-Montagu, who was born 13 March, 1961, succeeds a s4th Baron Montagu of Beaulieu.

Birth of son and heir to the Earl & Countess of Jersey ...

The Countess of Jersey is the former Marianne de Guelle, daughter of Peter de Guelle, of Jersey.