_. Lucia Jane Sonsino (nee Heriot Maitland, born 1981) scion of the Earls of Lauderdale, and wife of William Sonsino, gave birth to a son, Arthur Theodore, 19 June, 2017, a brother for Lily and Ralph.

William Sonsino is the younger son of Mr and Mrs Victor Sonsino, of Ravenstone, Buckinghamshire, and Lucia Sonsino is the eldest daughter of Lewis Dalgleish Heriot Maitland, TD (b. 1943), of Errol Park, Perthshire, by his wife, the former Prudence Jane Norris.
_=_
Posted by Michael Rhodes at Saturday, July 29, 2017 No comments:

William Boscawen is a son of the Hon Evelyn Arthur Hugh Boscawen (b 13 May 1955), of Cornwall, by his 1st wife the former Lucia Caroline Vivian~Neal {now Mrs Davod Borradaile}, of Dorset, & Emilia is a daughter of Mr & Mrs Fabrizio Falcetti, of Rome.

William Boscawen is the grandson and heir but one to the 9th Viscount Falmouth.

__. The engagement was announced 30 July, 2017, between James L.B. Prescott, son of Mr & Mrs Stephen Prescott, of Harrogate, North Yorkshire, & Alice Elizabeth V. Bainton (born 1985), scion of the Earls of Sutherland (Peerage of Scotland cr circa 1235), daughter of the late John Vernon Bainton by his wife the former Lady Annabel Elizabeth Hélène Sutherland (b 1952), daughter of the late Charles Noel Janson by his wife the Countess of Sutherland (b 30 Mar 1921), 24th holder of the ancient peerage.

_. The engagement was announced in July, 2017, between William Robert Freeland (b 1984), son of Mr Richard Freeland, of Toft Monks, Norfolk, by his wife (nee Munro), & Clare Elizabeth Pelly (b 1984), scion of the Pelly baronets, daughter of Mr (John) Henry Patrick Fuller Pelly (b 1953), of Fordcombe, Kent, by his wife the former Susan Elizabeth Briggs.

Posted by Michael Rhodes at Thursday, July 27, 2017 No comments:

Robert Beauclerk Loder was born 24 April, 1934, the third son of the 2nd Baron Wakehurst, KG, KCMG (1895-1970), by his wife the former Margaret Tennant, scion of the Barons Glenconner. Educated at Eton. Married 1973, Josette, daughter of Josef Bromovsky, by whom he had issue, three sons.

Robert Loder was sometime Chairman of the Mental Health Foundation and was apptd CBE in 1990.

Josiah Ralph Patrick Wedgwood, who died 23 July, 2017, aged 93, was a scion of the Barons Wedgwood, and an American citizen for many years.

He was born 25 May, 1924, second son of the Hon Josiah Wedgwood, sometime chairman of Josiah Wedgwood and Sons, by his wife the former Dorothy Mary Winser.

He married 25 Oct, 1943, Virginia Lloyd Hunt, daughter of Edward Eyre Hunt, of Washington DC,  by whom he had issue.

_. The Lady Antonia Dalrymple, who died at the Cluny Lodge Nursing Home, Edinburgh, 15 July, 2017, aged 91, was a scion of the Earls of Galloway, and the widow of Sir Mark Dalrymple, Bt.

The family seat was at Newhailes, Musselburgh, Midlothian. 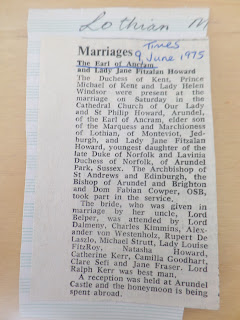 The Hon William Astor is son and heir of the 4th Viscount Astor.

Toby is a son of Capt Charles Heathcoat Amory (1945-2016) by his first wife the former Harmony Joanna Lyell.

Rosanna Heathcoat Amory is a descendant of the Ropner baronets.

Posted by Michael Rhodes at Thursday, July 20, 2017 No comments: 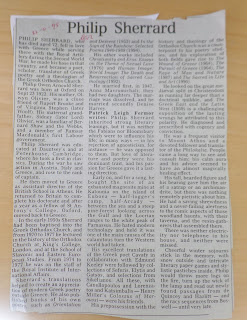 He was the son of Henry Birch Reynardson; married in 1950, Nik, daughter of General Sir Thomas Humphreys, by whom he had a son, Thomas, who was High Sheriff of Oxfordshire in 2015, a daughter, Clare, High Sheriff of Warwickshire in 2014, and Juliet.

Profile of the Marquess of Bath: Wessex man goes hippy-hop 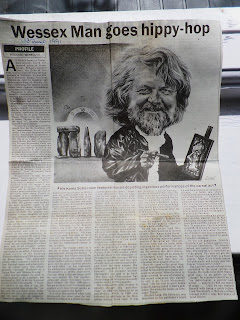 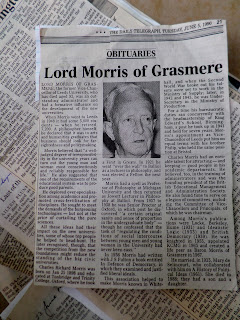 Posted by Michael Rhodes at Saturday, July 01, 2017 No comments: