Matilda Stopford is a niece of the Earl of Courtown. Jamie Wemyss is descended paternally from the extinct Dukes of Portland, and from the Earls of Elgin & Kincardine, &c. Jamie's grandfather, Lt-Col Sir Eric Penn, GCVO, was a senior member of the Royal Household. So, all in all, a uniot twixt families of courtiers.

Marquis of Lansdowne's heir to marry

Trevor Lewis married 18 April, 1964, Susan Jane, daughter of Arthur Birt-Llewellin, by whom he had issue, one son and three daughters.

He is succeeded in his baronetcy and peerage by his only son, the Hon David Trevor Lewis, who was born 21 Feb, 1977.

The 18th Earl of Devon, a descendant of the victors of Agincourt who fought to preserve his ancestral seat, Powderham Castle, died 18 August, 2015. He was 73.

Hugh Rupert Courtenay, the heir male of the ancient Frankish house of Courtenay, was born 5 May, 1942, son of the 17th Earl of Devon (1916-98), by his wife the former Sybil Venetia Taylor (former wife of the earl's cousin, the 6th Earl of Cottenham); married 9 September, 1967, Diana Frances Watherston, eldest daughter of Jack Watherston, by whom he had issue, a son and three daughters. He succeeded his father in the family honours, 19 Nov, 1998; he served as a deputy lieutenant for the county of Devon and was later Vice Lord Lieutenant. He is succeeded by his only son, Charles Peregrine Courtenay, styled Lord Courtenay (born 14 Aug 1975), who is married to the American actress, Allison Langer, by whom he has issue.

_. The marriage will take place in Weimar, Germany, later this month Aug 2015, of His Highness Prince Georg-Constantin of Saxe-Weimar-Eisenach (b 1977), only son of His Highness Prince Wilhelm-Ernst of Saxe-Weimar-Eisenach (b 1942), of Munich, by his former wife the former Eva Katharina Kovarcz de Kovarczfalva (b 1945, wife since 1991 of HSH Prince Carl Friedrich von Wrede), of Schloss Sandsee, Germany, & Miss Olivia Page, second daughter of Mr Christopher Page, of Boston, Mass, USA, & Mrs Mike van Oudtshoorn, of London NW3.

Prince Georg-Constantin is a descendant of King George I

Posted by Michael Rhodes at Friday, August 21, 2015 No comments: 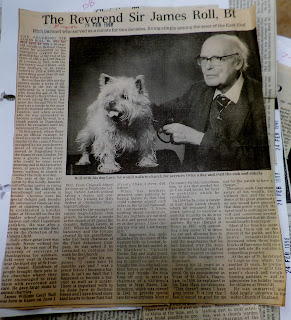 Posted by Michael Rhodes at Friday, August 14, 2015 No comments:

George Bingham, son of the missing Earl of Lucan, to marry

Rhydian Hoogewerf is a grandson maternally of the 2nd Baron McGowan.

The Hon Angus Elphinstone is the second son of the late 18th Lord Elphinstone (1953-94), by his wife the former Willa Mary Gabriel Chetwode (b 1984) scion of the Barons Chetwode (cr UK 1945), now the Dowager Lady Elphinstone, of Tyninghame, East Lothian.

The infant is a descendant of the 14th Earl of Strathmore, and is thus a kinsman of HM The Queen.

_. Lord John FitzGerald, scion of the Dukes of Leinster (Duke, Peerage of Ireland, cr 1766), the racehorse trainer, younger brother and heir presumptive of the 9th Duke of Leinster, died 3 August, 2015. He was 63.

Lord John was born 3 March, 1952, the second son of the 8th Duke of Leinster (Premier Duke, Marquess and Earl in Ireland) (1914-2004), by his 2nd wife the former Anne Smith, scion of that landed family; married 1982, Barbara, eldest daughter of Andreas Zindel, of St Moritz, Switzerland, by whom he had issue, a daughter, Hermione (born 1985), and a son, Edward (born 1988), who is now heir presumptive to the dukedom.

Lord John's wife has been recently been reported to be the partner of racing legend Lester Piggott. 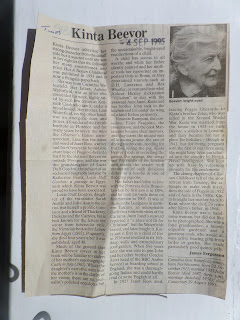 Posted by Michael Rhodes at Thursday, August 06, 2015 No comments: